Boylan’s story starts in America way back in 1891, when a pharmacist named William Boylan created an elixir in his Paterson, New Jersey, apothecary. He named that serum, a derivative of birch trees, Boylan’s Birch, and began selling individual cups from a barrel in the back of a wagon. In the latter part of the 20th century, Boylan found its greatest success in the distinctive long-neck embossed glass bottles for which the brand has become so well known. Although Birch Beer will always be a big part of the brand’s heritage, Boylan today is best known for its full line of hand-crafted sodas, ranging from our core four Ginger Ale, Root Beer, Black Cherry and Crème sodas, to other popular flavours, including Cane Cola, Orange and Grape. We’ve brought the full range over from American so you at home in the UK and Europe can try this classic!

Hints of vanilla extract, coffee, and chocolate result in a uniquely refreshing take on a classic crème soda.

Imported from the USA. 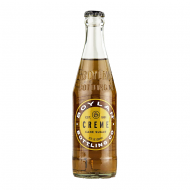 This website uses cookies to improve your experience while you navigate through the website. Out of these cookies, the cookies that are categorized as necessary are stored on your browser as they are essential for the working of basic functionalities of the website. We also use third-party cookies that help us analyze and understand how you use this website. These cookies will be stored in your browser only with your consent. You also have the option to opt-out of these cookies. But opting out of some of these cookies may have an effect on your browsing experience.
Necessary Always Enabled
Necessary cookies are absolutely essential for the website to function properly. This category only includes cookies that ensures basic functionalities and security features of the website. These cookies do not store any personal information.
Non-necessary
Any cookies that may not be particularly necessary for the website to function and is used specifically to collect user personal data via analytics, ads, other embedded contents are termed as non-necessary cookies. It is mandatory to procure user consent prior to running these cookies on your website.
SAVE & ACCEPT
Join Waitlist We will inform you when the product arrives in stock. Please leave your valid email address below.
Wishlist 0
Continue Shopping
0
0
Your Cart
Your cart is emptyReturn to Shop
Continue Shopping